Let’s begin this month with the odd one, a little French tank. Many decades ago I was a keen modeller of armour but then decided that life was too short to make tanks and aeroplanes when my main interest is in aeroplanes, so I stopped making tank models. The one exception I allowed myself French tanks in the mistaken impression that there weren’t many of them. I was wrong.

This is the Flyhawk 1/72 model of the Renault FT 75 BS, which was a gun mounted on the Renault FT chassis. The plan was to include one of these in Renault FT units to take care of any fortifications they came across, but they were not ready by the end of the war and only about 40 were made. This is the nicest Renault FT kit I’ve made in this scale and I’d make one with the turret too, except that I already have two and don’t need another. The box comes with two kits for this little tank but I don’t know that many people will need two models of this and I gave my duplicate to another club member (who had already ordered this kit and will now end up with three).

This RS Models 1/72 Bloch 155 completes my set of this French fighter. It is a nice little kit that goes together with relative ease, although not with Tamigawa precision. This version of the Bloch fighter would have been the standard production version rather then the Bloch 152 had the war not started when it did and only a handful were ready by the time of the Battle of France. My main trouble with this model is the Hataka French air force paint set and my own inability to read properly. I am almost certain that the vert in the set is not the right shade and substituted a darker green from the AK Real Color range which is probably not perfect either but makes me feel happier about the whole thing. The other problem was that I started off applying the light rather than the dark blue-grey to the top surface and things went downhill after that. Still, it’s a nice looking little fighter. 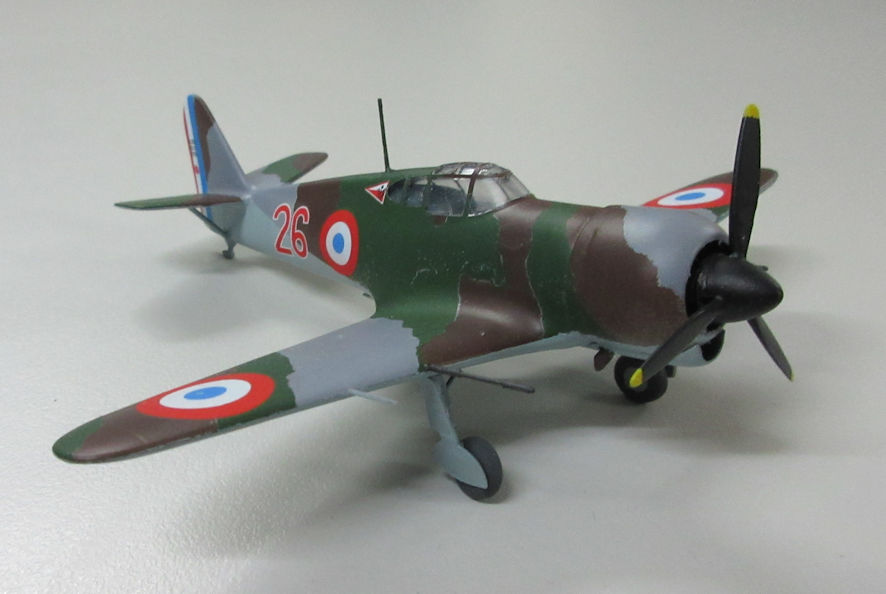 My recommendation to you is to not buy the Eastern Express 1/144 Boeing 757-200. The word is that it is a copy of the Minicraft kit and has all of its faults – with more thrown in – and none of its virtues. So, if you want to make a 757, Minicraft is a better choice. I’m told that a better choice again is the Accurate Airliners 757 but they are expensive and not always readily available. But if I’d gone straight to one of them I wouldn’t have had to buy aftermarket engines for this kit (because the kit ones are truly awful) which probably brought the total cost of this model up to the cost of an Accurate Airlines kit anyhow. However, I had the nice Wic Warcup decals for the Air Niugini 757-200 and didn’t want to waste them, so if you scrunch up your face and squint as these pictures you might just think this looks a bit like a 757.

Here’s three I made earlier

This LaGG3 is the old Red Star kit, a very minimalist kit but at one time the only one available to make a reasonably accurate model of a LaGG. The story I heard was that this, and the three other kits that came in the Red Star box, were the last gasp of the venerable Frog company and they certainly had that feel about them. This is not a bad little kit but I was in the grip of an advanced case of AMS when I made this so it had a lot of additional work done to it before it was completed.

This strange looking little thing is the Huma 1/72 kit of the Flettner F1282, one of the prototypes I believe. You might perhaps call this the first operational helicopter, though the idea of intermeshed rotor blades to overcome rotor torque did not take off in a big way. If I had still been in the grip of AMS when I made this I would have replaced all the kit struts with plastic rod, which would have helped make it a little more fragile.

Like the other two pre-made models this time, this Crown 1/144 Boeing B-17G was made over a decade ago. I would not be surprised if the same molds are still in use for the Minicraft B-17 that you can buy in the shops today. If I had been a bit more serious about this model I would at least have replaced the gun barrel with some thinner plastic rod or stretched sprue. Maybe next time.