In 1932 Marcel Bloch founded the Sociétê des Avions Marcel Bloch which produced its first aircraft in 1930. In 1934 the company began work on a new and modern fighter that would compete for adoption by the Armee de l’Air and construction of the first Bloch 150 began in September 1935. In the competition it lost to a rival design, the Morane Saulnier 406, but the Bloch 150 showed enough promise that development continued. However, when the prototype was first tested it would not leave the ground so significant changes were made and test flying began in 1937.

The prototype showed promise and the French defense forces were so desperate for modern fighters by that time that the government decided to put the 150 into production with an initial order for 300 aircraft. At this point it turned out that, as designed, the fighter was unsuitable for mass production and the structure of the airframe had to be redesigned to suit mass production. In April 1938 the French government decided to order three further prototypes with more powerful engines and so the design effort led to the production of the Bloch 151 and the 152 that were developed and produced in parallel.

The Bloch 152 had a more powerful engine 1,000hp Gnome-Rhone engine and improved armament. The prototype first flew on 15 December 1938 but it experienced engine overheating problems so a larger cowling was fitted which increased drag and reduced its performance. The first pre-production aircraft were completed in December 1939 and the first production aircraft was delivered to the air force on 7 March 1939. By mid May 1939 only 22 aircraft, a combination of 151s and 152s had been completed but only 10 had been accepted by the air force. By the eve of war 249 aircraft had been manufactured and about 123 had been accepted by the air force, but few were considered flyable, the majority missing their gun sights and propellers.
Increasing numbers of 151s were delivered to squadrons for training purposed in advance of their anticipated conversion to the 152 and during the Battle of France a mixture of 151s and 152s equipped nine Groupes de Chasse. They were tough aircraft, able to withstand considerable battled damage but, in comparison with its other French contemporaries, the 152 was the least successful in combat and the one that suffered the heaviest losses. Its shortcomings included poor agility, unreliable guns, being underpowered and a relatively low range. It was, however, the most numerous fighter type remaining in service when the Armistice was signed and it equipped six groups of the Vichy air force until it was disbanded in December 1942 and the aircraft were taken over by the Germans.With the Bloch 151 and 152 in production developments continued and two models, the 153 and 154 were planned to be fitted with more powerful American engines . One was the Bloch 153 which was fitted with a 1,200 hp Pratt & Whitney R-1830 Twin Wasp engine but it crashed a few days after its first flight and this line of development was abandoned, so the Bloch 154 was never made.

Development of the Bloch 155 from the 152 began in late 1939 to give the basic design improved range and improved manoeuverability. It’s Gnome-Rhone engine delivered 1,180 hp, the cockpit was moved back a little to allow a larger fuel tank and the armament was slightly upgraded. Ten Bloch 155s had been delivered by the end of the Battle of France and the Germans authorised the production of 20 more for the Vichy air force. When Germany occupied all of France they were taken over by the Luftwaffe.

A final development of the Bloch 150 was the Bloch 157 which began with the proposal to install the more powerful Gnome-Rhone 14R-4 engine of 1,590 hp. Designers soon discovered that that engine needed an almost new airframe that retained the structural principles of the Bloch 152. Construction of the prototype began in December 1939 but had not been completed by the time of the German invasion. Completion was authorized by the Germans and it flew for the first time in March 1942, minus armament. The trials were extremely successful, showing the Bloch 157 to be potentially one of the most powerful fighters of World War II. It was later destroyed in an allied air raid.
The Bloch 150 series of fighters showed that Marcel Bloch knew how to build a good fighter (after a bit or trial and error). After the war he changed his name to Marcel Dassault and his company is still making outstanding fighters.

The kits
There have been a few kits of these fighters but none of the original Bloch 150 that I could find. I did give some thought to trying to convert a 152 kit back to one but it had a smaller wing and other details that I could not readily find details for, so I decided to pass on making one.

There have been a few kits of the Bloch 151 and it is not much different visually from a 152 so making one is not very difficult. One could be made by converting the venerable Heller kit but much better options would be the Azur & TMA kit or the more recent RS Models kit. There is also the old Dujin kit which apparently has parts for both the 151 and 152 but it is as rare as hen’s teeth. In any event, I thought that the RS Models kit looked easier than the Azur kit to make and so used it. In fact, the kit has parts for both the 151 and 152 but is the best source of 151 decals. 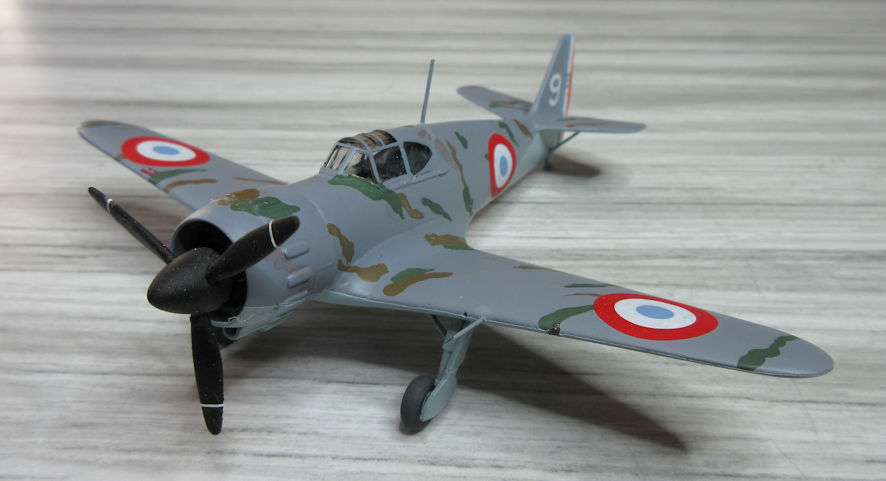 When it comes to the Bloch 152 there are plenty of possibilities. There is the ancient Heller kit which was first released in 1965 and has had more boxings than most people have had hot breakfasts, including a Hasegawa boxing in 1996. It is not one of Heller’s better offerings, I made one years ago but there are now much better offerings. There is the fairly good Azur kit which was first released in 2000, but I don’t know how readily available it would be these days. A better and simpler option is the RS Models Bloch 152 which has been released in four or five different boxings since 2014 and should still be around. It is a limited run kit but pretty good in most respected despite that.

The Bloch 153 represents more of a problem. There was, apparently, a VAMI Models kit that I haven’t seen and know nothing about, and there was a HR Model full resin kit released some time in the 1990s. I managed to get one of these but it was fairly dreadful and did not look too much like the RS Models 152. The only part of the kit that was worth keeping was the engine and propeller, and since the 153 was simply a 152 with a new engine I did the same thing and attached the HR Model resin engine to a RS Models 152 fuselage. This took a bit of doing, but it looks reasonable.

There was apparently a resin Airkit of the Bloch 155 which I know nothing about. The other two options are the Azur and RS Models kits which are basically their 152 kits with new fuselage parts. I thought the RS Models kit looked nicer and easier to build and used it.

The only basic kit of the Bloch 177 was the Dujin kit that Jean Pierre made some time in the 1990s. After his death his molds seem to ave gone to some people who are re-releasing some of them. Their boxing has the basic Dujin kit but with useful instructions, a small etch set and a good decal sheet. It is recommended, if you can find it.

The FGM Master Dujin resin kit is not one of those highly sophisticated resin kits that come out of the Czech republic but is one of Dujin’s better creations and can be made into a nice little replica of a Bloch 177 if you know what you are doing with resin. The only disadvantage of this model is that it only comes with German markings, but since that is how it probably only appeared in real life, there’s not much we can do about that.
With the others you could use either the Azur or RS Models kits. I chose the RS Models kits because, being more recently released, they were fairly easy to find. The real reason, however, is that in the Azur kits you get a nice little engine crank case and then a multitude of little cylinders to stick into it and in the RS Models you get only a very nicely resin engine molded in one piece. Really the detail of both is unnecessary because the engines are hidden deep in their cowlings behind bit propeller spinners.

The RS Models kit has a nice little cockpit and a fuel tank behind it so you’ve got something to look at through the rear windows. There are a few fit issues that a few dabs of filler will fix and the fit between the engines and the cowlings and propellers is imprecise, to put it mildly, so you need some care there. The cockpit windows are not a good fit and were the most troublesome part of the kit to deal with, I would have tried the Peewit cockpit canopies I see are now available instead, had I known about them.

My real gripe about making these models was in finishing them. There is no problem with the Bloch 157 because there are enough Luftwaffe paints available to sink a battleship. French colours are another matter. Modelmaster did a very nice set of World War II French colours that I used happily for many years, but they are now not available in Australia. Strangely none of the modern day fashionable paint makers have shown much interest in releasing French colours until recently when Hataka released sets of the major colours in both acrylic and lacquer dropper bottle sets. The upper and lower main colours, Gris Bleu Fonce and Gris Blue Clair look pretty good to me, and their Brun Fonce and Terre de Sienna colours look reasonable, but I’m not at all happy with their Vert and Khaki Francais which look dreadfully washed out to me. Instead, I’ve substituted the AK Real Color FS30492 Dull Dark Green for the Hataka Vert, but I’m still not entirely certain about it. Nobody makes that unique interior dark blue grey colour but fortunately I have a couple of bottles of the very rare Aeromaster paints that does the job very nicely.