We’ve let monsters into our house. Not only are they monsters of the usual kind, they are model kit eating monsters.

Last year I decided that it was about time I came to grips with this new (for me) acrylic paint. Having been put off by the first generation of acrylic modelling paints back in the 1990s I’ve stuck to enamels and been more than happy with the Modelmaster range. However, they are no longer available in Australia, and you wouldn’t even wash your dog in Humbrol or Revell paint these days, so it was time to bite the bullet. Following the advice of some of our MoB master modellers I bought a couple of sets of this acrylic paint, one of them being the AK Interactive Imperial Japanese Navy set.

Having paint for Japanese Pacific War aircraft implies making some models of Imperial Japanese Navy aircraft and that led me to make a couple of Aichi dive bombers. To say that I was not happy with the results would be an understatement. After the consistency and paint density of Modelmaster enamels that I’ve been using for decades, spraying this new plastic paint was like airbrushing with dishwater. However, having no other option, I battled on. Part of the problem lay, I think, in my trusty Badger Patriot airbrush with it’s .5mm nozzle. I started getting more reliable results after I bought and started using the new Badger Xtreme Patriot which has, so I am told, a .3mm tip. But that’s not the point of this story.

For seventeen years Valma and I shared our home with two Devon Rex cats who both died earlier in 2018. Having got used to the patter of paws around the house we bought ourselves two more Devon Rex kittens, a brother and sister born on 1August. They arrived in our home in mid October and immediately took control of affairs, as cats are supposed to do. What I didn’t realize is that while cats naturally train their servants into doing what they want when they want it, humans have to train cats in the ways of model making. I forgot this, having trained our previous cats years ago, and paid for it.

At about the time our new kittens arrived I opened the box of the Anigrand 1/144 Nakajima G5N kit. As is the tradition with Anigrand 1/144 kits, the main kits comes with three ‘bonus’ kits, in this case the Aichi E16A, the Kawasaki Ki-78 and the Yokosuka R2Y. They are not the most detailed 1/144 kits you will find but they are the only ones in that scale and interesting little aircraft. They are also not terribly difficult to make with not an overabundance of parts but they make up into reasonable replicas of the aircraft they represent. There are much better kits of all these aircraft in 1/72 and if you are looking for more lavish detailing and greater accuracy, you should go in that direction, but since I’d paid good money for the kit I decided to put together the bonus kits too, it seemed a better option than tossing them into the bin. 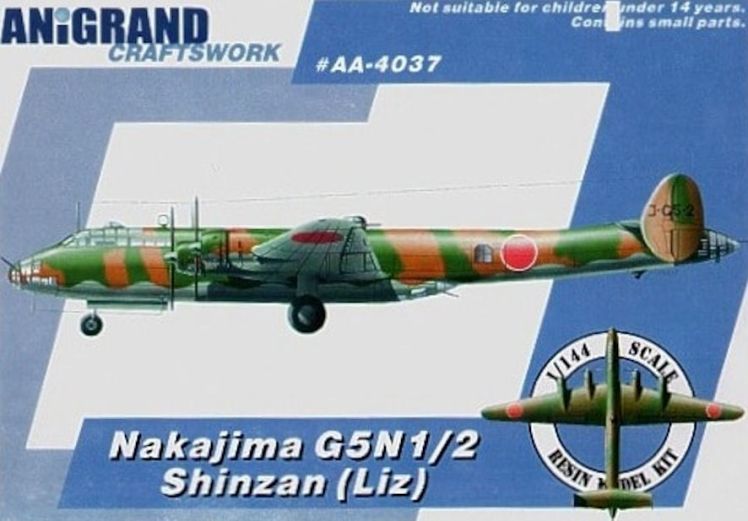 Let us, for the sake of propriety and good taste, pass over the part of the process in which I struggled with painting the models. Suffice it to say that it involved a great deal of harsh language and threats of instant expulsion to the rubbish bin if things did not improve next time. (They rarely did.)

I began to first notice my monster problem when I wanted to touch up the underside grey on a couple of the models after some terrible trouble with peeling paint when I removed some of the masking. I had used AK-2061 which is a kind of sickly grey colour but when I went to get the bottle, it wasn’t there. Where had I put it? It wasn’t in the area where I do my modelling and it wasn’t in the garage where I have my painting booth set up. Had it fallen into any of the rubbish bins? No, it had not, I could say with certainty after that unpleasant exercise. After a thorough search of all the likely areas of the house I was certain that I had not misplaced it but it was still nowhere to be seen. Taking the easy option, I decided to simply order another bottle of AK-2061, but it was out of stock at BNA and a couple of other online modelling shops I tried. There was no option for it but to put the paint on-back order with BNA and wait, patiently.

The problem solved itself a couple of weeks later when I was crawling around on the floor looking for something the carpet monster had eaten. There was the bottle of paint rolled up against the wall under the bed.

You know what they say about cats, that they are proof the world is not flat. If it was they would have pushed everything off it by now. No doubt little cat paws had pushed the bottle off my table onto the floor and then the Terrible Twins had entertained themselves pushing it to somewhere where they expected I would never find it. They failed that time, but foiled me with their next escapade. 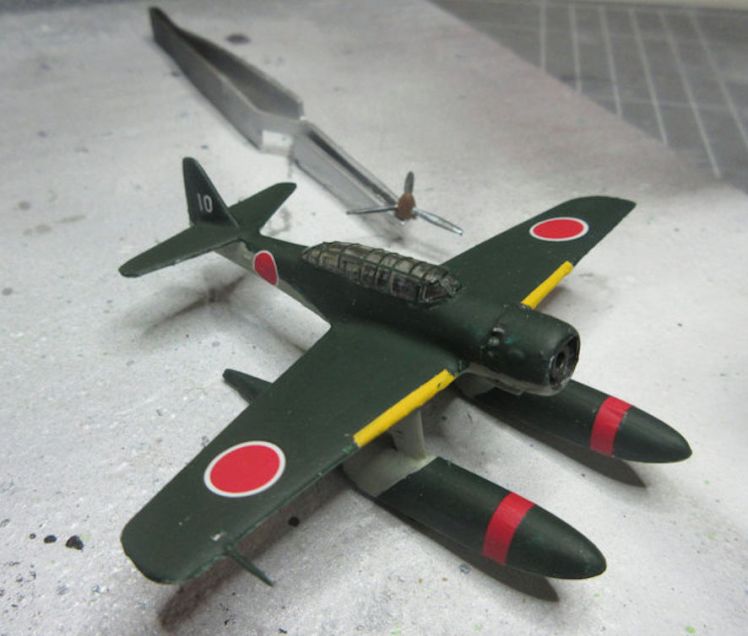 With the paint back in my possession the project to complete these four models continued. The first to be finished was the Ki-78, a simple enough paint job made easier by using the new AK Xtreme Metal range which is a lacquer, and I’m happy with lacquers so there was little trauma with this one. Next was the Yokosuka R2Y which is an interesting aeroplane, with two engines buried in the fuselage driving a six bladed propeller in the nose. Making the propeller was a challenge, getting the six tiny blades to line up properly using super glue is not something that soothes the nerves. But it went okay and I was quite proud of that. The airframe was ready to be completed and all I had to do was attach the propeller and the job was done. But, it had disappeared! It was there one minute and gone the next, never to be seen again. The only thing that had happened between when it was there and when it wasn’t was a visit by one of the kittens. Either the monster had decided that the propeller looked interesting enough to eat, or cats have the secret super power of being able to make things disappear. Either way, I had a perfectly acceptable model of a R2Y and no propeller. It was far too complex for me to scratch build so into the bin the model went, and a lesson was learned, I thought. 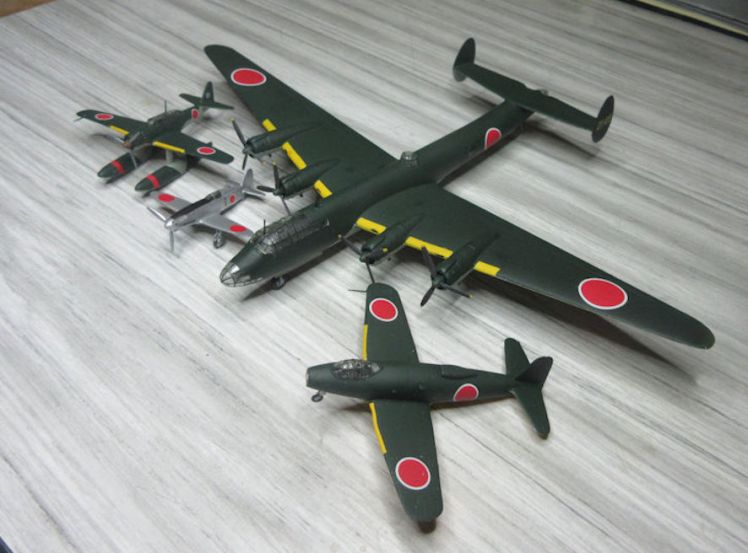 What was the lesson? That kittens and tiny plastic parts seem to attract each other, but I don’t think that this has anything to do with Newtonian physics. More likely, little cat eyes are drawn to things that are smaller than they are and that little cat mouths like clasping them. A day or two later, when I was about to finish the E16A, one of the kitten wandered over to look at what I was doing and had the model in its mouth and was heading off with it to its lair before I caught it, just in time.

Eternal vigilance has become my catchcry now that the two little monsters are here. I swear that I was gone from the room for only a minute or two; when I left there were four propeller waiting to be attached to the G5N and when I returned there were only three. Fortunately for the monsters, however, it hadn’t gotten far and was lying in the carpet nearby with two of the blades still attached. I gathered up the kittens, marched them to the spot of their crime and told them that there is nothing in the laws of physics to make a perfectly normal model propeller jump from a table onto a floor and for one if its blades to disappear. They looked at me blankly; ‘What’s physics?’ I could see them thinking.

I have spoken severely to the kittens about their bad habits but they ignore me. Instead, they look up at me with their big soulful eyes and say, telepathically, ‘Not us, we wouldn’t do anything naughty’. I don’t believe them. I’ve also interrogated them about what happened to that small sheet of decals I left on my work table for the Skywest Fokker 50 I’m working on. It is out of print and rare but, again telepathically, they declare their innocence. I expect to find it, half chewed, tucked away in some hidden corner of the house many years from now.

I’ve taken steps to minimize the effects of our new monsters bad habits but, what can I do. They look so adorable, and innocent.